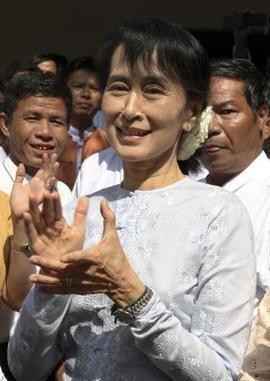 Democracy champion Aung San Suu Kyi will contest the upcoming by-election in a Yangon neighbourhood that was hard-hit by the 2008 Cyclone Nargis, opposition Fontes said on Tuesday.

“It’s official. She will contest in Kawhmu Township, Yangon,” National League for Democracy (NLD) spokesman Nyan Win said. Kawhmu is located in the southwestern part of the Yangon region.

The area was among those worst hit by Cyclone Nargis in May, 2008 that claimed 138,000 lives in the Yangon Region and Irrawaddy Delta.

Myanmar will hold a by-election on April 1, to fill 48 parliamentary seats left vacant when cabinet members assumed their ministerial posts in March, 2011.

See it on Scoop.it, via Iscos Marche Onlus